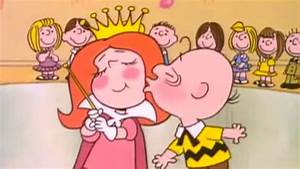 Sounds familiar, right? At first glance, you may not even realize where exactly you know those words from, but give it a second. You’ll get it.

Charlie Brown first catches sight of her during an outdoor lunch period in the fall of 1961, while sitting on a bench by himself, eating his peanut butter sandwich. He watches her, thinking: “Boy, I’d give anything if that little girl with the red hair would come over and sit with me.”

Yet he doesn’t DO anything! Two years later, she reappears and pretty much the same thing happens!: “I’d sure like to eat lunch with that Little Red Haired Girl . . .” This is a small improvement, as this time he is trying to muster up the guts to go sit with her instead of wishing she’d come sit with him, like a loser. Yet in the end, he decides she’ll probably laugh in his face and he can’t go through with it.

Then nothing. Nothing, nothing and NOTHING. 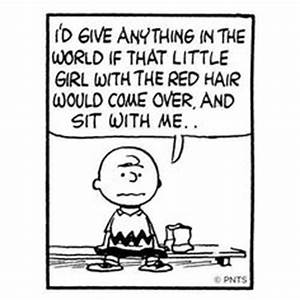 “Nothing takes the taste out of peanut butter quite like unrequited love . . . “

All this NOTHING goes on for forty years. We never saw her, never knew her name, but all the same, Charlie Brown loved her for the entire run of the strip. In those forty years, did he ever once eat lunch with her, did he ever hold her hand? Did he ever kiss her, ever tell her he loved her? Geez! Did he ever marry the girl?

Because CHARLIE BROWN never had the guts to speak to her Little Red Head, not one time in forty years! Not once! He just stared and pined and ached, acted like a doofus every time he was near her. He wrote her Valentines and love letters upon love letters, but he never sent them or he sent them anonymously. He tripped over his own shoelaces, he sharpened his ball point pen . . . and never said a word to her. Not one single thing. 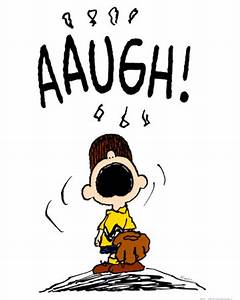 “Hello, ma’am. I’d like to buy a box of chocolates for a girl who doesn’t know I exist. Nothing too expensive, I’ll never have the guts to give them to her anyway.”

So the Little Red Haired Girl? Elusive, mysterious. Forever unattainable. Charles Schulz based her on his own real life sweetheart, a pretty little coworker named Miss Donna Johnson Wold who had rejected several of his marriage proposals. She turned him down flat and married another fellow, hence her Little Red Immortality. Of his own broken heart, Schulz said, “I can think of no more emotionally damaging loss than to be turned down by someone whom you love very much. A person who not only turns you down, but almost immediately will marry the victor. What a bitter blow that is. The whole of you is rejected when a woman says: ‘You’re not worth it.’”

This explains the recurring theme of unrequited love in the strip, but is Charlie Brown’s love for his fiery haired vixen actually “unrequited”? Schroeder constantly rebuffed Lucy’s advances toward him, Linus rejected Sally with remarkable ease! Old Chucky Boy never noticed (or pretended not to notice) neither Marcie’s nor Peppermint Patty’s feelings for him, but he was never rejected by the Little Red Haired Girl. He assumes rejection, says:

“There must be millions of people all over the world who never get any love letters. I could be their leader.”

Then perhaps the Little Red Haired Girl never gets any love letters either? Maybe she wants one and moreso, maybe she wants one from Charlie Brown himself! Her feelings toward him (if she has any) are never revealed, simply because no one ever *asks* her. She’s getting no Valentines, her phone ain’t ringing. She isn’t even seeing anyone else, but no one ever bothers to ask her how she feels about Charlie Brown. 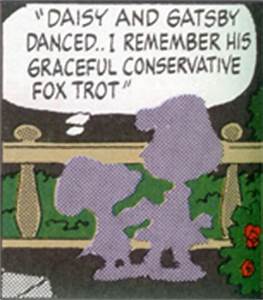 So today I’m going to say what I have been wanting to say to Charlie Brown for [almost] forty years: *WHAT* ABOUT THE LITTLE RED HAIRED GIRL?

Your Little Red Haired Girl has feelings too, you round headed punk! Beautiful women don’t always have armies of rich, handsome gentlemen beating down their doors and for all you know, maybe she sits at home with her dog every Valentine’s Day too. Maybe she she sits and dreams of you and round headed babies, but those dreams are never realized because your lily livered butt is afraid of rejection? 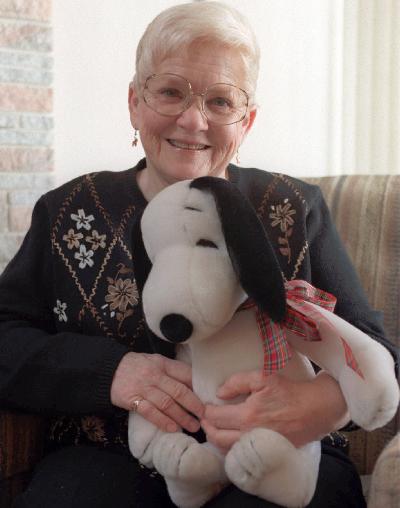 Thus because the love of her life never talks to her, she’s doomed forever to watch reruns of Murder She Wrote, all alone with her grey hair up in curlers? Eating a frozen dinner off a wicker tv tray? Wondering where her life went wrong and playing tiddlywinks with her forty nine cats?

Oh, Charlie Brown. You disgust me. 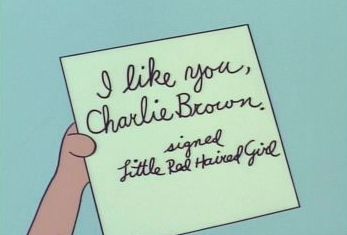