Lately I’ve been getting a LOT of judgmental emails about my straightforward, wonderfully candid blogs and apparently you all think I’m a big, giant angry dater, ultimately destined to become an old maid until my eyeballs rot out my head and I eventually die alone . . .

Whatever. Maybe. But come on, is that really so bad?

I was telling my friend the other day about how I didn’t really need to date anymore because I already had a dog and I swear, this chick’s eyeballs nearly hit me in the chin! She is 23, married with two kids, a veritable Stepford Wife and very clearly bitter because she missed the boat on the 1950s; I’d shocked the hell out of her and she stared at me with disgust, as though she’d never heard of such a thing. Finally she spoke: “No boyfriend,” she explained knowingly, her eyes glazing over with fancy dinner parties, PTA meetings, and dirty diapers , “equals no husband.”

She then ran her perfectly manicured fingers through her perfectly curled hair, straightened her petticoat and ran up the stairs, returning a few seconds later with a thick hardcover book and she smiled broadly as she shoved it in my face. “Read it,” she said. “It’s your new bible.”

I took the book in my hands, looked at it and almost threw up~ it was a light blue book with a big red heart on it, entitled Love Smart and proclaiming the slogan, “Find the one you want~ FIX THE ONE YOU’VE GOT!” And who was the freak leaning up against that heart? Yup, you guessed it~ it was none other than America’s favorite nationally syndicated [and divorced] dating guru, THE ONE AND ONLY DR. PHIL!!! 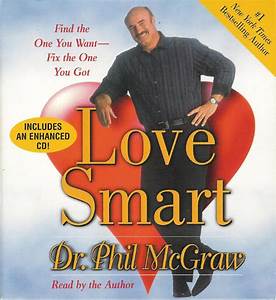 I laughed so hard I almost died.

“Don’t laugh,” she said. “It’s okay to admit you need help.” She then went on to tell me how it was a number one best-seller and how she had all his books, including Self Matters, Relationship Rescue and get this~ The Ultimate Weight Solution.

And I love how in chapter one (entitled YOUR GPS: Great Partner Search), he clearly states in BIG bold letters:

I do not now believe, nor have I ever believed, that any woman has to be married or have a man in her life in order to be whole, complete or vitally alive.

Whatever. What a crock. I’ve had it with simply dating, why on earth would I be worried about marriage? All my friends are worried about it, my roommate is engaged, my neighbor is engaged, my best friend is engaged to a man she’s known less than three months and it’s like, dude . . . you’re all crazy. Let’s face it, I’m still single and trapped in the crowd of predominantly male people who thinks life stops at marriage. But then the only married people I was around growing up were my grandparents and when I think about that, I just see my grandfather sitting leisurely in his chair, watching tv as my grandmother ran around frantically like Edith Bunker, dusting and cleaning and serving him dinner, all the time yelling things like, “Oh, Roger, I give up . . . who was your servant last year?”

I can tell you right now, that life will never work for me. And when I think of things like white picket fences and rosebushes, carpools and diapers, hamsters and field trips and dinner at six, my heart sinks even more~ who the hell wants that?

Maybe one day I’ll feel like learning about “infrared dating” and getting my “relationship black belt” and when that happens, MAYBE I’ll read the alleged “bible” again, but for now, Dr. Phil is my enemy and self-help books just aren’t my bag. : )