Ladies and gentlemen, John Steinbeck is the man. Thanks to him, I went East of Eden, Travelled with Charley and before I’d even graduated from my Catholic School Uniform, I learned the difference between Mice and Men.

“I am impelled, not to squeak like a grateful and apologetic mouse, but to ROAR like a LION out of pride in my profession!”

Of mice and lions, there you have it.

Steinbeck and I have that in common.

On the other hand, there is a difference between being a *Great American Author* and being *Miss Brianne Sloan*, sitting at a computer, whining because some yahoo made her swallow a contact lens! Or crapped his Scottish Scuba Suit! Or because an angry Muslim chased her into a churchyard, screaming, “Hello, Sabrina! You owe me one hundred one dollar! Prepare to die!”

I’ve been at war with being a “writer” most of my adult life. At 18, it was easy because I was stupid: “Screw college, I can write circles around all these idiots.”

And that was true. Be that as it may, I was afraid college would irreversibly butcher my writing. How could I trust a professor who didn’t even respect the comma? I mean, HELLO!? The comma is the GLUE that holds your sentence together!

I should have learned how to do something *else*, something PROFITABLE. My financial situation is getting worse every time I check the mailbox- and writing usually doesn’t even cover my rent.

Tell THAT to your lion, Mr. Steinbeck.

Still I can’t blame my problem on a lion. I blame it on a dog.

I did not become a writer because of Steinbeck, I became a writer because of Snoopy the Dog. I was but three years old the first time I saw Snoopy the Musical and after viewing a four minute musical number (ironically titled “The Smell of Success”), my fate was sealed. I sat indian style on the carpeting, eating my Spaghettios and I saw the most beautiful thing I’d ever seen:

Snoopy sitting on his doghouse. With a typewriter.

A beautiful, glorious typewriter! It was instant love!

It was so amazing! He typed the word “it”, then he repeated the word over and over to himself while he decided what to do with it! And then whatever he typed would happen in the background! He’d type things and then they’d just appear! POOF! The weather would change! POOF! Woodstock would be wearing a different outfit. And POOF! All these money bags would come rolling in off the horizon! Just like that!

And I thought, “Wouldn’t that be a great job?” Sitting on a doghouse, controlling the universe, simply by typing on a keyboard . . .

I must have missed the *rejection letter* at the end.

If I can blame all the “Prince Charming” delusions I had on Walt Disney, than certainly I can blame the life path I chose on Charles Schultz. If he weren’t already burning in the Lake of Fire, I’d write him a strongly worded letter, demanding reparations for all the trauma that’s ensued.

As you can see, *I* am the victim here and I am requesting transitional justice. I hereby state that a three year old is not mentally sound enough to deal with cartoon beagles shoving animated delusions of grandeur down her throat. I should have been punished every time someone caught me sitting on the doghouse, scribbling in a notebook. I can’t take another rejection letter from PLAYBEAGLE.

I need to get off the metaphorical doghouse and find a real job. I’d have better luck waiting for John Steinbeck on top of the Empire State Building.

In conclusion, don’t take life advice from the Peanuts Gang. When you go to the mailbox and open up a bill for twenty seven thousand dollars, the word PEANUTS  starts to seem *really* symbolic. 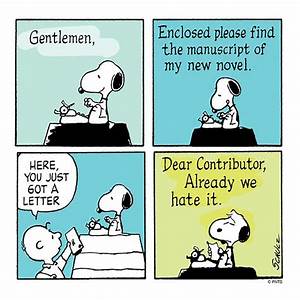