In my own personal transition into adulthood, I have seen many trends and fads in America that I have struggled to understand: Cargo pants! Sagging pants! Chain wallets! TOMMY jackets! TOMMY everything! Menudo! The Spice Girls! Pet rocks! The Macarena! Pogs! 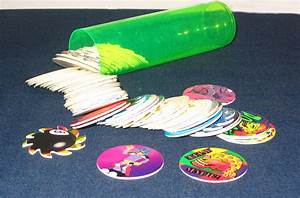 For the love of god! POGS!

Most ridiculous, laughable and just plain asinine trends eventually run their course and die out. I will proudly admit that I have saved all my bellbottoms and that there are days when I’d give my right arm for a can of Surge or a refreshing box of Ecto Cooler! I even still have a few Backstreet Boys cds that I swiped when we gave them out at Burger King with the kids meals! But for most of us, there came that day when you had to say goodbye to your Rachel Cut or slice off your Rat Tail forever! Yes! As difficult as it was, you had to admit that life was moving forward and you couldn’t hold on any longer!

It’s true! I too threw away my mini backpack! I parted with scrunchies I’d had since childhood! I  even tossed my Red Yankees Hat! I had to, times were moving on and clinging to the past was no longer a viable option!

So tattoos. What are we going to do about tattoos?

(The “fad” may pass, but the tattoos will not.)

(*DISCLAIMER*: By the time you read this, it will probably be too late, but please, please, PLEASE don’t let me offend you. Let me take a moment to remind you that you went out and actually paid money to have someone stick needles into your skin so you could prove your “uniqueness”, just like EVERYONE ELSE did  . . . why would you care what I think? Let me express MY individuality, thank you.)

I’ve never made any secret of my personal distaste for tattoos; I don’t like them, I’ve never liked them and I am not ever going to like them. In fact words like “loathe” and “detest” and “scorn” come to mind, but it’s more than that! This is an epidemic! Tattoos are everywhere! On everybody! For instance, back in about 2011,  I decided on my “perfect” guy, my absolute Prince Charming! I chose a Time Travelling Cowboy with Homeless Hair, No Tattoos, A British Accent and 20/20 Vision . . . yet here in 2015, I am still having trouble finding him.

It’s an absurd list, I know, but who would ever have thought the hardest thing to find would be the “NO TATTOOS!” part! I swear, nothing makes you see past a sexy British Accent quicker than a face full of ink! My reasons for hating tattoos have always been many, but when I was a child, they were hardly common. I can specifically remember consoling a neighbor who cried for three days when he woke up from a drinking binge only to find the Confederate Flag tattooed on his shoulder! 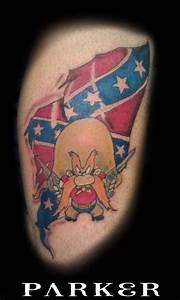 Regular, everyday joes simply did not tattoo themselves, such atrocious brands were strictly reserved for military men! Convicts, strippers, prostitutes and pimps! Bikers and pirates . . . and my father.

(I mean my birth father, not my grandfather)

My father was not (and still isn’t) active in my life in any way at all, but suppose he had been? Suppose he had simply picked me up from school?  Me in my pigtails and Catholic school jumper, wearing cute little penny loafers and carrying a Beauty and the Beast lunch box? In those days, had people  seen me being lifted up into a tow truck by a rough looking dude with Yosemite Sam on one shoulder and an angry snake on the other, eyebrows would have been raised. Police may have even been called, it could have been messy. 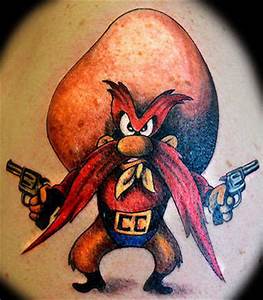 Now what the heck has happened in the intervening years!?! I very well may die alone because I can’t find a single, solitary man who is not sporting one stupid tattoo or more! I was having trouble finding my soulmate anyway, but any man who is worthy of half my soul would never (and I mean NEVER) actually hand over money to somebody holding a gun and ask to be repeatedly be stabbed with sharp needles, all in a crude effort to savagely alter his skin.

Why does this not strike more people as slightly barbaric?

Now you would think a man so concerned with expressing his own “individuality” would not give two hoots that I will not date him, but it’s quite the contrary actually: my blatantly rejecting a potential suitor over his purposefully mutilated skin has not only angered most of the men folk in these parts, in some cases it has unleashed a vengeful, deep seated hatred that I myself can’t fully comprehend. I have lots of friends with tattoos, tons actually~ they don’t take me seriously and they shouldn’t, but when it comes to boys? BOYS? Oh, golly. Quell beast. Most of them aren’t even all that interested in dating me, it’s that I have specifically chosen not to date men with tattoos that offends them to no end.  I have been spit at, called horrible names that would surely be bleeped on tv and I’ve been stoned in more ways than you could possibly imagine! As though it were my own fault that tattoos turn me off.

Or worse, sometimes they’ll whine excuses, if you can believe it. They don’t need to “excuse” anything to ME obviously, but these are the “excuses” I hear most often:

But would you call THIS art?: 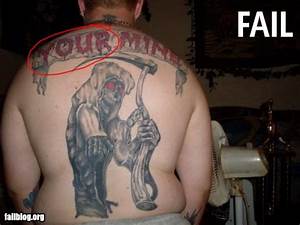 Furthermore I can sit at the gym and pretend to be interested in watching the buff boys pumping iron, while really I’m just counting all the heinous tattoo sleeves I see before me! Now if that is not originality and distinction, I don’t know what is! There are so many of them on almost every single arm in the joint and they all pretty much all look exactly the same. It is far rarer to see clean, unmutilated arms, at least at my gym.

This is conformity at its worst. So much for “uniqueness” and “individuality”!

Then the girls are even more mystifying. To date, tattoos have *never* made any woman more attractive or more desirable. “Oh, she was a total dog until she got that super hot tramp stamp! Wowzers! Now she’s smoking!” You’ve never heard anyone say that because no one has ever said it. Also why do people seem to think tattoos make women look trashy?

Pssst! It’s because they do!

Am I discriminating? Of course. Am I being unfair? Of course. Am I being narrow minded and prejudiced and a royal pain in the rump? You betcha.  I know it’s terrible of me, but if you have tattooed your whole head, I am not going to take you seriously. I don’t care how smart or capable you are, I would not want you teaching my kids . . . or removing my gallbladder . . . or writing me a traffic ticket or defending me in court. Please. From a distance, you look like a reptile.

Which brings us to the NUMBER ONE reason not to get a tattoo: AGING. I know it doesn’t seem like it now, but believe it or not, you will age. Then you’ll age some more and then some more, and on and on until you die. This is fact. I know because for centuries and probably even millennia, people have been trying in vain to outsmart the aging process. They’ll buy anything, try anything! They’ll lift, they’ll wax! They’ll peel! They’ll exfoliate til the cows come home, but let’s face facts: at the end of the day, all you’ve got is merely a multi billion dollar industry with little to no results. You’ve either got good genes or you’ve got bad genes, but you’ve got no choice in the matter.

This is something people talk about often and it’s usually the very first argument people make when expressing an abhorrence for tattoos, but strangely it does not seem to be something anybody ever truly thinks about. You will be all wrinkly one day and this IS America . . . you’ve got a pretty sizable shot at getting fat too, no pun intended. Not only will you sag and stretch and bloat, your tattoos will as well. Should you live that long (knock on wood!), one day you WILL be elderly. Now the thought of sitting in the old folks’ home is depressing on any level, but can you imagine sitting there and playing backgammon looking like this:

This does not strike you as self mutilation?

If you have an unsightly blemish, you usually cover it up. A hairy mole or an ugly tumor you would have removed, correct? Yet insurance would cover that . . . so what happens when you get sick of your tattoos? You have no idea what’s going to be important to you down the line, how could you possibly know? So in conclusion, I am going to leave you with the story of my New Kids on the Block lunch box:

When I started the second grade, I got to pick out a new lunchbox. My mother warned me that whatever I chose I would have to carry for the rest of the year, but I didn’t listen! Wanting to be seen as “hip” and “neat” by all the cool, older girls (you know, the ones with the shell wave bangs and the Converse Sneakers and the posters of Joey McIntire all over their walls), I chose a spiffy new New Kids on the Block lunch box. I loved my lunch box, I carried it proudly day in and day out, but then! Something terrible happened! I’ve never known exactly what led to to the rapid demise of the New Kids, maybe it was the failure of that year’s New Kids Christmas Special? Maybe it was the flop of the New Kids’ Saturday morning cartoon? Maybe it was that I had attended a concert at the Veteran’s Memorial Arena and had decided  all the smoke and lights and everything were super phony? Maybe I’ll never know . . .

Any way you look at it, the New Kids were passe by the time I returned from Christmas Break of that year . . . but I was still stuck with that stupid lunchbox the rest of the year! Oh, how I was tortured!  It was merciless! I was called a “dork” and a “dweeb” and a “nerd” and all kinds of other names that seem inordinately brutal to a seven year old! I was so ashamed! I cried til I couldn’t cry anymore, it was traumatic! Kids can be so cruel!

Yet I only had to carry that silly lunchbox for the rest of the year and it almost killed me- suppose I’d had to lug that stupid thing around  . . . FOREVER?

Essentially that is what your new tattoo may end up being! A ridiculous New Kids on the Block lunchbox that you will have to carry around for all eternity. Now you think about that one.

Merry Christmas to all! Please don’t hate me!